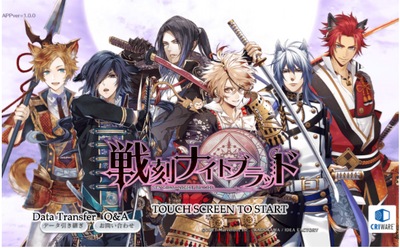 Senbura's gameplay consists of collection of character cards (of different rarity, hence different stats), usage of combination teams (to boost stats) and the player's (as the main character / MC) romantic interactions with each of the characters.

The player forms a team of 5 characters to fight against enemies in the Main Battle storyline, as well as take part of PVP (player vs player) encounters and join Event Battle during events.

Character cards consist of the following rarities - 5* Ultra Rare, 4* Super Rare, 3* Rare, 2* S and 1*Normal cards. 2* consists of the SD (chibi) version of all the warriors. Character cards of 3* rarity (Rare) cards and above can be awakened once their affection level reaches 100%. 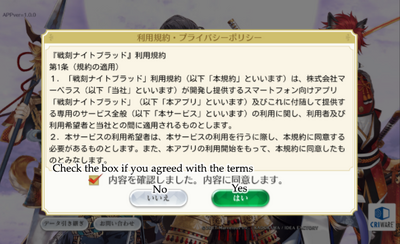 Before Tutorial Mode, you will be requested to read the Rules of Conduct and User's Agreement. Tick the check box and tap the [Green] button to confirm. For all dialogue boxes [White] = No [Green] = Yes or Confirm. 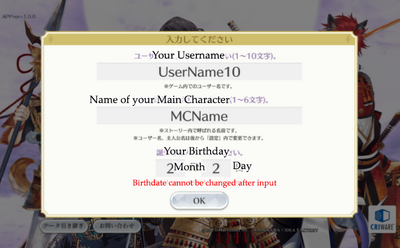 Next, you will be requested to fill in your User Name [ユーザー名], name of your ingame character [主人公名] and your birthday [誕生日] in month [月] and day [日] . User Name and ingame name can be changed later in the Profile section of the Settings. You can enter these using English Language characters. The game will now download a set of files before you can choose your Starter.

You will be asked to choose a clan where your starter will be from. The starter character is randomly drawn from a 3* to 5* deck and is usually a 4* or Super Rare card. You would be able to obtain a 5* Ultra Rare card from the starter roll.

You will be given usually a Super Rare (4*) as your Starter. Rarely, you can obtain a Ultra Rare (5*) from this roll. A 5* will appear if the moon appearing in your loading screen shimmers.

Once you have chosen your Starter, continue with the Tutorial by following the pulsing/blinking light as shown on your screen. You will be brought through various important aspects of the game, including :

The Newcomer Missions will award you a total of 150 Gems upon completion. You will be required to fulfil the following quests for each of these rewards. 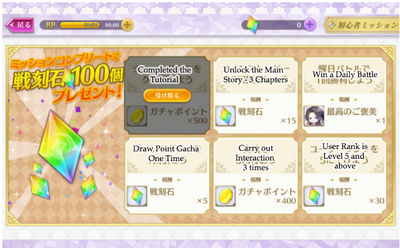 Once all missions are completed, obtain another 100 Gems as a completion reward by tapping the yellow button on the right side of the panel.

Question : Am I allowed to re-roll in Senbura? How do I go about it?

Answer : Re-rolling is possible and here are some methods used by most users to re-roll.

Re-rolling Senbura on Android Go to your Settings -> Applications -> Scroll down and find Senbura -> Click Storage and clear data.

Re-rolling on NOX emulator Settings -> Apps -> Storage -> Click on Senbura -> Click Clear Data. You may be required to re-download the data again.

For iPhone users, you may be required to do a re-install on your device.

These methods are to be used at your own risk. We, at the Wikia, are not responsible for any failure of your device should that occur.

Community content is available under CC-BY-SA unless otherwise noted.
Advertisement